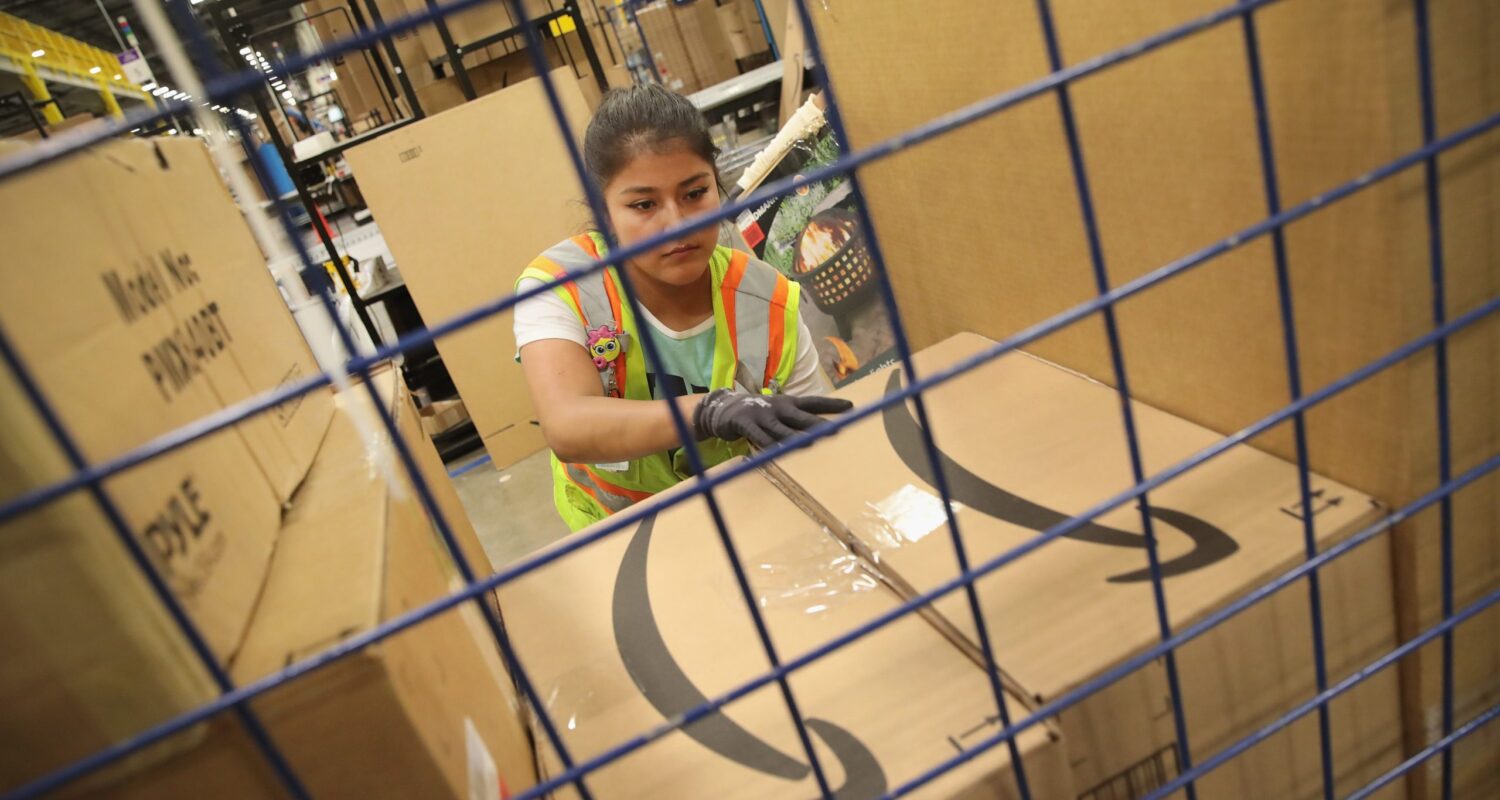 Writing at Tribune, Paris Marx exposes the waste and unsustainability of the Amazon business model…

This year, Amazon’s ‘Prime Day’, the sales event it created back in 2015, fell on 21 and 22 June. As many news organisations showered the ecommerce monopolist with free press to let their readers know about the great deals they could get—in some cases, by using the publications’ affiliate links—ITV News published a story that would make people think twice about indulging their inner consumer.

In the ITV News investigation, correspondent Richard Pallot found that the Amazon fulfilment centre in Dunfermline on the east coast of Scotland was destroying millions of unsold items every year. Many of them had never even been removed from their packaging.

An anonymous Amazon worker told Pallot, ‘From a Friday to a Friday our target was to generally destroy 130,000 items a week.’ A leaked document for a single week showed 124,000 items marked for destruction, but only 28,000 marked for donation, while a manager told Pallot that some weeks more than 200,000 items would be destroyed.

According to the anonymous worker, about half of the disposed items were returns that were often in good condition, while the other half were new products – and not just cheap plastic junk. ‘There’s no rhyme or reason to what gets destroyed,’ said the worker. ‘Dyson fans, Hoovers, the occasional MacBook and iPad; the other day, 20,000 Covid (face) masks still in their wrappers.’ While some of that product goes to recycling centres, much of it ends up in landfill.

The scale of waste revealed by ITV’s investigation is not exclusive to Amazon’s British fulfilment centres; nor, in truth, is Amazon the only culprit. The report further illustrates the disconnect between the image the company tries to sell to the world and how it really operates, but it also goes deeper than that to show the inefficiency at the core of our consumer economy.

The Scale of Amazon’s Destruction

The Dunfermline warehouse is just one of 24 Amazon fulfilment centres in the United Kingdom. Around the world, Amazon currently operates more than 175 warehouses, and is in the process of building many more as it seeks to capitalise on the increase in spending it captured during the pandemic. It’s impossible to say exactly how much product is being trashed at all of those other warehouses, but we know it’s happening. ITV isn’t the first media organisation to pick up on it.

In 2019, French network RTL released a documentary on wastage at Amazon after an investigation found the company destroyed more than three million products in France in 2018, including 293,000 products over nine months at one of its smallest fulfillment centres located in Chalon-sur-Saône. The products included books, packs of Pampers nappies, expensive Lego sets, and even unopened LG televisions.

Echoing the ITV investigation, RTL found that part of the reason for all this waste was the increasing storage costs that Amazon charges third-party sellers to keep their items in Amazon warehouses. Sellers are encouraged to take advantage of that option because it provides a better chance of exposure on the platform, but the documentary found that the cost of a metre of space in an Amazon warehouse has soared and sellers are incentivised to trash their goods if they don’t sell. When one seller went to remove their products, the cost of returning an item was £17, compared to just 13p for destruction.

While it received less attention in the English-speaking press than the ITV report, German public broadcaster Das Erste also published a Greenpeace investigation to coincide with this year’s Prime Day that found a significant amount of destroyed product coming from its fulfillment centre in Winsen. The report echoed the cost to third-party sellers, but also showed that Amazon workers were instructed to remove perfectly good product from packaging and even to intentionally damage some items so they could be disposed of under German circular economy laws. It’s a pre-emptive measure, as those regulations are not yet being enforced.

In the United States, Amazon sells used, returned, warehouse-damaged, and even some new products under the Warehouse Deals section of its website. It also sells pallets of returns under Amazon Liquidations. But it’s not known how much product ends up getting resold and how much is disposed of, nor how much the buyers actually keep from the lots they pick up at low prices.

The Externalities of Customer Obsession

What do these revelations actually tell us about Amazon itself? Amazon claims it’s optimised for the customer. Admittedly, that’s more corporate propaganda than a statement of fact, as by pushing up sellers’ fees, Amazon is actually making products more expensive while capturing more revenue for itself. It’s more accurate to say that Amazon is customer-focused, as long as that focus aligns with its broader goals of revenue maximisation and corporate expansion.

But even were we to take Amazon at its word, the quantity of waste being pumped out of its fulfillment centres demonstrates that there are even more externalities to optimising for consumer convenience than we previously realised.

It’s already been well-documented how Amazon’s customer obsession creates an oppressive and dangerous environment for its warehouse and delivery workers. Turnover at fulfillment centres is off the charts, the injury rates in the United States are double the industry average, workers are constantly monitored and can be easily terminated for missing their quotas, and they even have a hard time being able to use the toilet while they’re on shift.

Beyond the harm to workers, the environmental toll of Amazon’s business is enormous and constantly growing. Amazon has made a big deal in recent years about its pledge to hit net-zero emissions by 2040 and its $2 billion investment to develop ‘products, services, and technologies to protect the planet.’ Yet it also illegally fired two employees who were pushing it to adopt more aggressive climate policies during the pandemic, and missed its previous environmental commitments while expanding its cloud partnerships with oil and gas companies.

Now we have growing evidence that Amazon is also filling landfills with perfectly good product, and to make matters worse, a lot of that product is electronics. E-waste can be particularly difficult to recycle, and if it ends up in landfills it can release harmful chemicals. It’s bad enough to trash Covid masks and nappies when people could use them.

While it’s important to investigate Amazon’s role in this problem, it’s much bigger than just one company. In fact, the revelations demonstrate a structural problem with the mass consumption central to our economic system.

The Consumer Economy Is Broken

We’re frequently told that the capitalist free-market system is the most efficient way to organise an economy. Yet built into the just-in-time supply chains that feed the global consumer economy are mountains of wasted food and consumer goods that could instead go to people who need them – if they should be produced at all.

Beyond Amazon, Tesco has previously been criticised for its food waste problem, which it’s taken action to reduce in the years that followed. Target was fined in California for illegally disposing of hazardous e-waste for years. Companies like Cartier and Nike have admitted to destroying their unsold products so those they do sell maintain their value, while fashion companies destroy millions in unsold merchandise every year. And that’s just the tip of the iceberg.

Retailers and restaurants throw out immense quantities of product every year, and their very existence is premised on a broader disposable culture. We are conditioned to constantly replace things. In the same way that Amazon has created an environment in which disposability is a normal way of doing business, we have built an economy where it makes business sense to overproduce or mismanage production so millions of products are unnecessarily thrown away every year.

Amazon’s model of shipping vast quantities of goods in small packages that arrive at the customer’s doorstep within a few days, if not a few hours, is not sustainable and likely never will be. But it’s the product of a decades-long push to prize low prices and convenience above all else, and to see workers and the environment as collateral in that quest.

Changing those fundamental tenets of our economic system will require more than altering our personal consumption patterns or putting in place new taxes to try to shape corporate actions. It requires a much deeper rethink of how our economy works, and who it is designed to serve: if Amazon is a representation of the modern capitalist economy, we should be asking what its equivalent would look like in a sustainable, socialist alternative. 4 thoughts on “Amazon Is a Symbol of Capitalism’s Wastefulness”