The Science Museum is facing a backlash after it quietly revealed that fossil fuel giant Shell would be the sponsor of its flagship climate exhibition when it reopens in May. ‘Our Future Planet’ is part of the museum’s programme in the run-up to November’s COP26 Climate Summit. It will focus on Carbon Capture and Storage, a controversial technology often overstated by oil and gas firms such as Shell to justify their ongoing production of fossil fuels. Scientists for Global Responsibility have called the museum’s move “staggeringly out-of-step and irresponsible” and campaigners have accused the museum of “helping to boost Shell’s cynical greenwash”.

The museum’s press office published a flurry of three press releases yesterday covering its “sustainability initiatives” – including the new exhibition – but it was only the final one revealing the exhibition’s new sponsor that made any reference to Shell, with the company’s logo only added to the exhibition webpage yesterday evening.

‘It beggars belief that this iconic British institution has freely chosen to link up with Shell to sponsor their flagship climate exhibition at such a crucial time. Clearly they know that they are supping with the devil, as they have existing links with BP and Equinor. I can only conclude that they simply don’t care, and have no interest whatsoever in playing a responsible role in tackling the climate emergency.’

The Science Museum Group (SMG) has already come under pressure in recent weeks over its existing partnerships with the oil companies BP and Equinor. Journalist George Monbiot, environmentalist Mark Lynas and comedian Robin Ince all pulled out of the museum’s ongoing series of ‘Climate Talks’ in protest, with Monbiot asking on twitter ‘‘What respectable organisation still takes money from this planetary death machine?’ and Robin Ince writing a highly personal blog expressing his concerns.

‘By allowing Shell to sponsor this exhibition, the Science Museum is helping to boost the company’s cynical greenwash, giving dangerous legitimacy to Shell’s overstated carbon capture fantasies and claims to be going “net zero”. In reality, no oil and gas company is aligned with the targets in the Paris Agreement or is coming close to reducing fossil fuel production as fast as the climate science demands. When most cultural organisations have now cut their ties to oil companies, is the Science Museum really going to choose its backing for Big Oil over its own reputation in the run-up to COP26?’

After pressure from campaigners, Shell’s long-running relationships with the Natural History Museum, National Gallery, Edinburgh Science Festival, National Theatre, Southbank Centre and British Film Institute have all now been ended, and in September last year, the art activist group Fossil Free Culture NL celebrated having made Amsterdam’s Museumplein “fossil free” after bringing about the end of Shell’s partnerships with the Van Gogh Museum and the Royal Concertgebouw.

‘When it is more important than ever to stop sponsorships fuelling the climate emergency it is staggeringly out-of-step and irresponsible for a flagship scientific institution like the Science Museum to help market an oil company which has a public record of disinformation about the climate emergency and about its own role as an energy company. This will be seen as tone deaf in the year the international climate talks are due in the UK and will be a decision to haunt the management of the Museum for years to come.’

Shell’s recent ‘Net Zero’ commitment, announced in February 2021, has been widely criticised for being too vague, and not reducing oil and gas extraction at the scale and pace required. The company actually plans to increase its total fossil fuel output in the next few years, and the majority of its investment will continue to go towards oil and gas. To get to ‘net zero’ while doing that, it plans to rely heavily on potential future Carbon Capture and Storage technology, and capture 120 million metric tons of carbon dioxide per year via ‘nature-based’ offsets by 2030. In reality, this means planting trees that would cover more than double the land area of Brazil.

‘[Carbon capture] technologies are being developed but they are expensive, energy intensive, risky, and their deployment at scale is unproven. It is irresponsible to base net zero targets on the assumption that uncertain future technologies will compensate for present day emissions.’

‘Shell is a grotesquely inappropriate major sponsor for a major Science Museum exhibition in the run up to COP26. Shell has no realistic carbon reduction plans, has produced carbon disinformation and denialism and is responsible for huge emissions. Shell is now promoting production side failed Carbon Capture and Storage technology, rather than vital demand side limits to fossil fuel extraction.’

This is not the first time Shell’s sponsorship of the Science Museum Group has sparked controversy. In 2015, emails released under the Freedom of Information Act revealed how Shell had attempted to influence the climate science exhibition it was sponsoring. In 2018, 46 highly-respected scientists, science policy experts, naturalists and community representatives called on the SMG to end its partnerships with BP, Equinor and Shell, joining forces to support a formal complaint to the museum. Among them were naturalist Chris Packham, former NASA climate scientist Professor James Hansen, and expert in science disinformation and author of Merchants of Doubt, Professor Naomi Oreskes.

The Guardian on our Science Museum complaint

In the same year, several partners pulled out of the Manchester Science Festival over the decision to make Shell the sponsor of its headline exhibition. Most recently, in February this year an investigation by Culture Unstained revealed how the museum’s director Ian Blatchford actively helped BP to counter critics of its cultural sponsorship. Blatchford is unapologetic about his museum’s fossil fuel partnerships, stating:

‘Even if the Science Museum were lavishly publicly funded I would still want to have sponsorship from the oil companies.’

The Climate Action 100 report, which assesses publicly available information on polluting companies’ progress towards the Paris 1.5 degree goal, recently found that Shell failed to fully meet any of its criteria. Even if Shell’s Net Zero announcements are judged by the less-ambitious Paris target of ‘holding the increase in the global average temperature to well below 2°C above pre-industrial levels’, the company falls short. Research by the Transition Pathway Initiative published in October 2020 showed that, “No fossil fuel energy major has yet set an emissions target in line with limiting climate change to 2 degrees”.

Despite billions in public funding over the last decade, the world is currently capturing and storing a mere 0.01% of all greenhouse gas emissions. As of 2020, only 26 plants with Carbon Capture and Storage (CCS) are in operation globally, despite the technology existing for over twenty years. 22 of these 26 existing CCS plants are being used for ‘enhanced oil recovery’ – rather than simply being stored, the carbon dioxide is pumped into wells to extract hard-to-reach oil. This makes the process financially viable, but of doubtful benefit to the climate.

Many museums and cultural organisations have cut their ties to oil companies because of their role in fuelling the climate emergency. Meanwhile, the British Museum continues to face large-scale protests and calls to end its controversial sponsorship deal with oil giant BP, with the museum expected to decide whether to renew the relationship in the coming months. 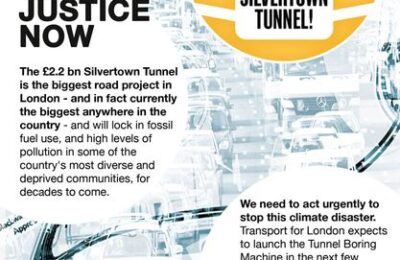