A pier at the dried Aculeo Lake in Paine, in 2019. For decades the lake was one of the main tourist attractions of Santiago’s surroundings. Photograph: Martin Bernetti/AFP/Getty Images

From the Atacama Desert to Patagonia, a 13-year megadrought is straining Chile’s freshwater resources to breaking point.

By the end of 2021, the fourth driest year on record, more than half of Chile’s 19 million population lived in an area suffering from “severe water scarcity”, and in April an unprecedented water rationing plan was announced for the capital, Santiago.

In hundreds of rural communities in the centre and north of the country, Chileans are forced to rely on emergency tankers to deliver drinking water.

“Water has become a national security issue – it’s that serious,” said Pablo García-Chevesich, a Chilean hydrologist working at the University of Arizona. “It’s the biggest problem facing the country economically, socially and environmentally. If we don’t solve this, then water will be the cause of the next uprising.”

Chile’s water crisis was high on the agenda when, in 2019, millions of protesters took to the streets to demand that the country confront its entrenched inequalities.

Among their demands – which ranged from better pensions to healthcare reform – the slogan “it’s not drought, it’s theft” was a common refrain.

Many called for a rewrite of Chile’s 1981 water code, a relic of Gen Augusto Pinochet’s dictatorship (1973-1990) which enshrines one of the most privatised water systems in the world, allowing people to buy and sell water allocations like stocks.

Chile is also the only country in the world that specifically says in its constitution that water rights are treated as private property.

Before his election last year, Gabriel Boric, Chile’s progressive new president, promised a green future for the country, emphasising the protection and restoration of hydrological cycles.

An abandoned boat at the dried Aculeo Lake in Paine, about 70km south-west of Santiago, Chile, in 2019. Photograph: Martin Bernetti/AFP/Getty Images

Boric, 36, signalled his intent by appointing a renowned climate scientist, Maisa Rojas, as his environment minister – but he need not look far for a jarring reminder of the task awaiting him.

Just 50km south of Santiago, Lake Aculeo, once a tourism hotspot, was wiped off the map in less than a decade, disappearing altogether in 2018.

A recent paper, of which García-Chevesich was a co-author, found that the sale of water rights, local population growth and climate change combined to dry the lake out completely.

“I find it really hard to say the ‘former lake’,” said Jenny Caru, 40, a local water activist, as she picked a path across the cracked earth to the centre of the lakebed.

In its heyday in the 1990s, the lake in Aculeo – meaning “where the waters meet” in the Indigenous language Mapudungun – had a floating bar serving holidaymakers and boats traversed the lagoon all summer long.

Top, people paddling a kayak at the Aculeo Lake in Paine, Chile, on 1 January 2013 and a view of the dried lagoon taken at the same spot on 5 March 2019. Photograph: Christian Miranda/AFP/Getty Images

Now, jetties sit uselessly metres above the dry mud, and slipways trail off into a dusty thatch of dead stems.

Signs declaring it safe to swim ring an empty lakebed, and restaurants and campsites sit dry and abandoned.

“This is where I grew up,” said Caru, “It hurts me that the lake isn’t there any more, that the trees are drying out and the birds are gone.”

In 2010, the rights to the water feeding the lake were legally acquired by large agricultural plantations and private estates, which siphoned off the main tributaries. Valleys around the basin passed from annual crops to summer homes and water-intensive fruit tree plantations.

As the area transitioned from agriculture to tourism and then went into steep decline, locals were forced to find work in the gated holiday communities – or move to Santiago.

“I used to supply all of the markets and communities in the area,” said Alfonso Ortíz, 73, a farmer who once employed several workers to grow watermelons, pumpkins, corn and oranges using water from the lagoon.

“Agriculture here is dead. There’s nothing left,” he said.

But its growth has come at a price.

Supported by the private rights system, about 59% of the country’s water resources are dedicated to forestry, despite it making up just 3% of Chile’s GDP.

Another 37% is destined for the agricultural sector, meaning only 2% of Chile’s water is set aside for human consumption.

In this aerial photo, a pier sits on the dried lake bed of the Aculeo Lagoon in Paine, Chile, on December 2021. Photograph: Matias Delacroix/AP

“If they diverted your river to grow fruit and avocados to sell to foreigners – and now they’re bringing you water in tankers – how would you feel?” asked García-Chevesich . “It’s humiliating and undignified.”

Across central and southern Chile, watersheds are in danger of suffering the same fate as Lake Aculeo.

“There’s a fundamental problem here: the end goal for our water is to make money, not wellbeing for people,” said Caru, who retains hope that the lake will return one day.

But while the need for change is urgent, hope could be on the horizon.

In April, President Boric signed a reform to the 1981 water code that had languished in congress for 11 years. It declares water a public good for human use, and acknowledges climate change as a threat to Chile’s water availability.

Elsewhere, a new draft constitution has been drawn up – the upshot of 2019’s mass protests. It goes even further in revising Chile’s relationship with its resources, stating that water must be protected in all its states and phases, as well as declaring it essential for life and nature.

“Every day in Chile the human right to water is violated,” said Carolina Vilches, who was elected to the country’s constitutional convention in March 2021. “This is why what we have put in the constitution is so fundamental – we need to change how we view our water.”

The draft will be put to a plebiscite on 4 September.

“We need to apply the brakes and take responsibility for all of the errors which have already been committed,” said García-Chevesich. “If not, the consequences will be dire.” 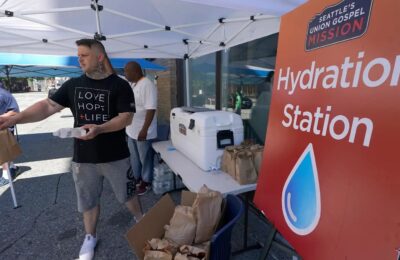