Britain Climate Change Energy Geographical Green New Deal Housing and Building Local government Trade Unions
This fascinating article by Phineas Harper first appeared in the Guardian.
This week the highest honour in the architecture world was awarded to a pair of Parisian designers better known for revitalising existing buildings than creating new ones. The Pritzker prize, which includes a $100,000 jackpot, went to Anne Lacaton and Jean-Philippe Vassal, whose most impressive projects – the Palais de Tokyo in Paris, upgrading three social housing blocks in Bordeaux, and the extension of a Dunkirk warehouse to form an arts complex – are all refurbishments.

‘The humble and unphotogenic work of refurbishing, repairing, maintaining and upgrading existing buildings is rarely celebrated.’ The Bois le Prêtre in Paris, renovated by Lacaton and Vassal. Photograph: Christophe Petit-Tesson/EPA

It’s the first time in the award’s 46-year history that retrofitting, the practice of upgrading buildings rather than knocking them down to start again, has triumphed. Lacaton & Vassal’s victory has shaken up the architectural profession and signals a remarkable shift in priorities among the world’s best city-makers. If embraced more widely, this could transform how buildings everywhere are regenerated.

Architecture is typically obsessed with newness. A seemingly endless parade of industry awards shower gleaming new buildings with plaudits and praise. Like contemporary art, architecture thrives on the idea of originality, devaluing work that seems derivative. This thirst for novelty produces some innovative buildings, but it also results in numerous shiny baubles that appear principally designed for Instagram feeds.

The humble and unphotogenic work of refurbishing, repairing, maintaining and upgrading existing buildings is rarely celebrated among city-making professionals. Despite campaigns to foreground refurbishment from the Architects’ Journal and others, awards routinely go to new buildings of questionable merit, even while older outstanding estates and community facilities are neglected.

Far too often, precious buildings that serve valuable community roles have been demolished, such as Sheffield’s Hyde Park estate realised under city architect John Lewis Womersley, and Owen Luder and Rodney Gordon’s 1966 Tricorn Centre in Portsmouth, both of which lost battles against demolition proposals with disastrous environmental consequences.

Building is one of the most polluting activities in the UK economy. The vast majority of the emissions it causes come from a combination of heating existing buildings and the energy expended in demolitions and new construction. At present, the sector emits the equivalent of 186 megatons of carbon dioxide a year. According to the UK Green Building Council, to meet Britain’s obligations under the 2008 Climate Change Act that level needs to more than halve by 2025, and halve again by 2050 – an enormous challenge for a notoriously slow-moving industry.

Part of what makes this particularly difficult is that constructing almost anything requires vast amounts of energy. While new buildings can now be made very energy-efficient, the materials and processes required to construct them in the first place generate such high emissions that the net impact of new buildings is often arguably worse than building nothing at all. It’s a carbon catch-22 – existing British buildings are not energy-efficient enough to be sustainable, but knocking them down and erecting new ones will also emit more carbon than we can afford.

Lacaton & Vassal’s Pritzker win hints at a solution. The key to bringing the environmental impact of architecture in line with planetary limits is to dramatically improve the energy efficiency of existing buildings while radically reducing new construction. In other words: less demolition, more refurbishment.

Yet despite the ecological merits of refurbishment, many British local authorities consistently back demolition-led strategies (bizarrely, new construction is VAT exempt, while retrofitting is not). Councils often favour knocking down entire neighbourhoods and rebuilding them from scratch, rather than upgrading existing architecture. In Liverpool, for instance, the controversial housing market renewal initiative famously saw hundreds of good-quality terrace houses flattened to make way for development.

Although it is endemic in the UK, this enormously inefficient and highly polluting model is exactly the kind of shortsighted practice that Lacaton & Vassal, with fellow French architect Frédéric Druot, attacked in their 2007 manifesto, Plus. In Plus, the designers condemned demolition-led architecture, declaring “Never demolish, never remove or replace, always add, transform, and reuse!”.

This rallying cry is diametrically opposed to most British regeneration projects. For instance, rather than transforming and reusing its 1974 Central Library, Birmingham city council spent £200m building a new library and knocking down the adjacent original in 2013. The project was so costly that two years later, the city’s glamorous new library was forced to cut its opening hours and staff by almost half.

The central case study of Plus is Lacaton & Vassal’s own refurbishment of a 1960s residential tower on Boulevard du Bois le Prêtre in Paris. The 96-apartment building had been badly reclad in the 1990s, and the municipality was poised to knock the tower down. The architects proposed keeping the building and using the money that would have been spent to fund its demolition and reconstruction on bolting prefabricated winter gardens to its facades instead.

The resulting building provided every resident with more indoor space, huge new windows and generous balconies. It cost 62% less than a demolition-led approach would have done. The revitalised tower now runs on 60% less energy; overall, the refurbishment required 74% less energy than what would have been used in demolishing and rebuilding the block.

Embracing Lacaton & Vassal’s anti-demolition tactics wouldn’t just cut emissions, it would safeguard communities and heritage too. The making of new buildings is often called “regeneration” but frequently couldn’t be further from it. Demolishing existing buildings often splits up communities that have taken generations to form. Frequently, the new facilities regeneration brings simply replace older facilities that degenerated through underfunding or were closed or relocated in preceding decades.

Far better would be a Lacaton & Vassal-style strategy of maintaining and enhancing buildings. Imagine, for instance, if in the London borough of Lambeth, where the council is planning to knock down Rosemary Stjernstedt’s 450-home Central Hill Estate (one of Britain’s few modern masterpieces designed by a female architect), a refurbishment-led approach were chosen instead of outright demolition. Families wouldn’t be displaced, buildings could be upgraded efficiently, carbon emissions would fall dramatically.

Lacaton & Vassal’s generous green refurbishments, now venerated by the profession’s highest award, are a lesson in how we could bring British architecture’s carbon emissions under control and protect communities from the wrecking ball. Less demolition. Less new construction. Epic world-class retrofitting instead. 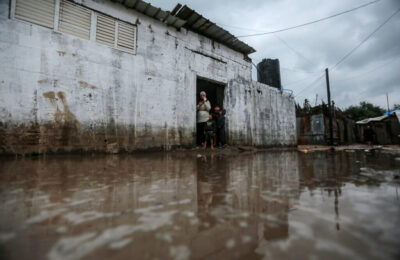