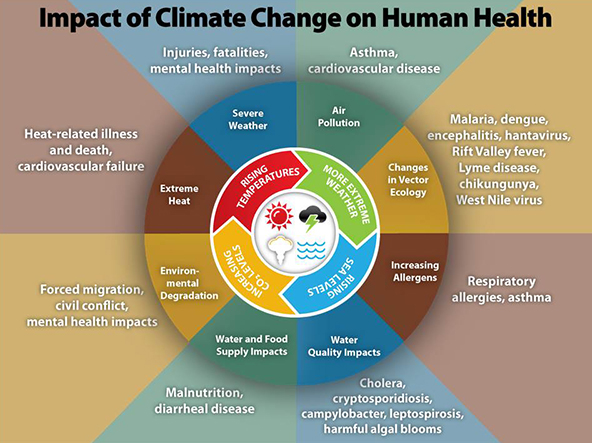 When it comes to the health impacts of the climate crisis, every degree matters. This fact has been keenly emphasised in the recent instalment of the sixth Intergovernmental Panel on Climate Change (IPCC) report, released in March.1 It details not just the effects of the climate crisis that are still to come, but many that are already with us. The report has a strong focus on the impact of the climate crisis and ecosystem collapse on human health, and is the first of their reports to discuss mental health. These health impacts will not affect us all equally, and this report highlights how those facing marginalisation and oppression are being hit first and worst.

Despite the urgent need to reduce emissions, the most recent IPCC report, published on 4 April, on mitigation scenarios showed that we are on the path to climate disaster.2 In the same week, the home secretary Priti Patel reportedly accepted a £100 000 donation from a company run by one of the world’s most prominent oil traders.3 Global emissions are still rising and we are on track for potentially over 3°C of warming. Meanwhile, governments and fossil fuel companies attempted to use their influence to make the IPCC reports less damning.4 We have a rapidly closing window left to take action and prevent the worst impacts of the climate crisis, but the UK government continues to lie, greenwash, and gaslight the public.

In February 2022, a coalition of UK medical leaders wrote to the government urging them to end the UK’s dependence on fossil fuels, stop the continued expansion of oil and gas in the UK, and deliver a just transition to renewable energy.5 The signatories, including the BMA, the Royal College of Physicians, and the UK Health Alliance on Climate Change, wrote:

“The UK is in the middle of an energy and climate crisis. Millions of UK households face real energy poverty, whilst the impacts of climate change are already affecting the country…The country is facing two crises with the same underlying cause: the UK’s continued reliance on expensive and polluting fossil fuels for its energy supply.”

We are in the middle of an energy crisis due to rising gas prices, which could see up to six million households in the UK living in fuel poverty.6 In winter 2018, more than 17 000 people died preventable deaths as a result of cold housing,7 and damp has been shown to exacerbate mental health problems and cause cardiovascular and respiratory disease.6 While millions struggle to meet their basic needs, the government opposed a windfall tax on the soaring profits of oil and gas companies.8 The interests of the oil and gas industry are being placed above the lives of the poorest people, and we must not allow the government to pretend otherwise by blaming the energy crisis on green policies or war. It is the result of industry greed, inadequate home retrofitting policy, and a fundamental failure to deliver the just transition to renewables we need.

In the context of the Russian invasion of Ukraine, we must also acknowledge that oil and gas, as well as other extractive industries, have been consistent drivers of violence, war, and conflict for decades. From Iraq to the Niger Delta, communities at the frontlines of fossil fuel extraction face everything from daily acts of systemic violence to war. Regimes financed by fossil fuels are enabled to inflict destruction from Yemen to Ukraine, and war in turn further fuels the climate crisis.

Drilling more oil and gas in the North Sea, which will take decades to reach the market and will mostly be exported, is not a solution.9 The International Energy Agency has said that no new oil and gas is possible while meeting the 1.5°C target and much of our existing production must be rapidly scaled down.10 Despite this, the UK government’s new energy security strategy plans for more North Sea oil and gas extraction, prioritises nuclear over investment in wind and solar, and has no adequate plan for home insulation.11 The government is approving and fast tracking multiple oil and gas fields, with over 40 more in the pipeline, in full knowledge that this threatens a liveable future.12

Ending our reliance on oil and gas is also an issue of international health equity. The global north is responsible for 92% of excess global emissions.13 In contrast, we know that the health burdens of climate change fall disproportionately on the global south. The IPCC now explicitly identifies “historical and ongoing patterns of inequity such as colonialism” as a factor in vulnerability to climate change.1 Based on current and historic emissions, the UK’s estimated fair share of 1.5°C is a 200% reduction in emissions below 1990 levels by 2030.14 This requires full decarbonisation domestically and the funding of decarbonisation in other countries.

A just transition means putting the people who will be most affected by the transition at the centre of planning, including oil and gas workers. Jobs in oil and gas are becoming increasingly precarious and insecure, and have long been risky to health. Around 81% of offshore workers would consider leaving the industry, with many citing an interest in renewables if supported to retrain.15 Transitioning workers and ensuring no community is left behind in the transition is essential to achieving health equity.

Even if the UK achieves a transition to renewables, excess consumption in the global north, demand for endless economic growth, and many other industries still drive ecological collapse. We must entirely transition the global economy to one that does not profit off war, suffering, loss of life, and planetary destruction. Even the IPCC states that “mitigation at the speed and scale likely limit warming to 2 degrees or below implies deep economic and structural changes.”1 But we can start with dismantling the fossil fuel industry.

So I end this piece by asking you—what are you doing to resist the worst health crisis of our times? Some of our healthcare community are blockading the treasury in protest of their continued public funding of oil and gas companies. Others are advocating for a justice-based Green New Deal in the UK. Meanwhile, the Wellcome Trust continues to directly invest millions of pounds with companies including Shell, BP, and JP Morgan.16 This continues despite overwhelming evidence that fossil fuel companies are actively blocking climate action, peddling fake science, and pushing for more oil and gas. No amount of greenwashing and talk of 2050 targets could convince me to accept this. History has its eyes on the health community, and I know who I’d rather stand beside.