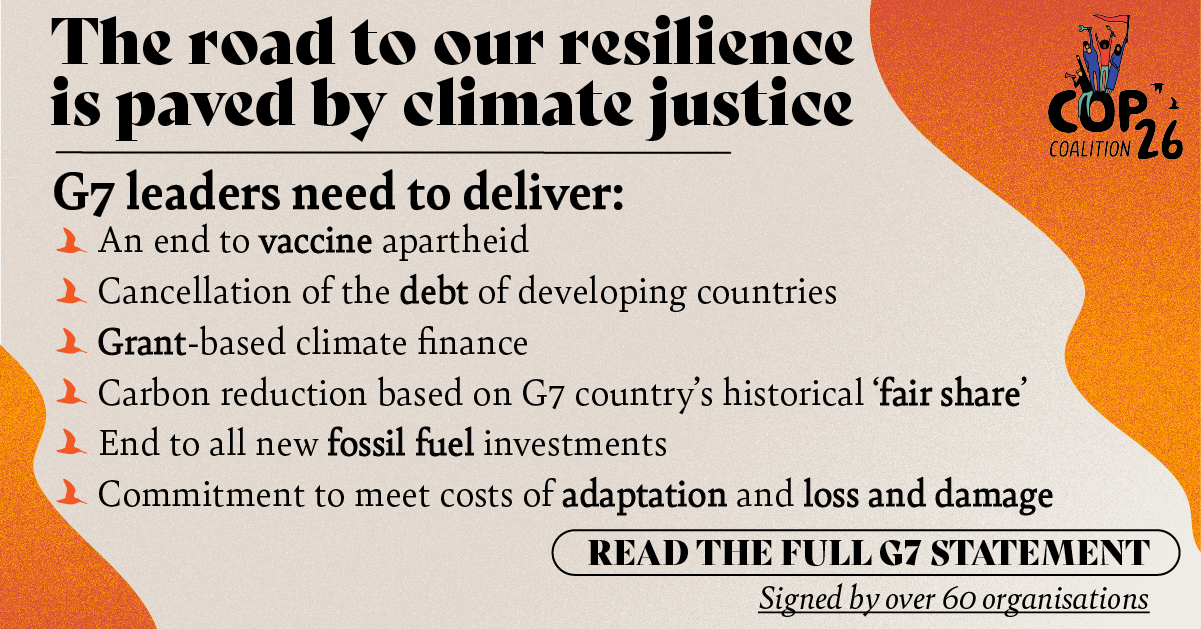 The G7 summit, which begins today in Cornwall, kicks off a season of intergovernmental talks including the G20 conference in October and COP26 in November. Combined, these events come at a pivotal moment in what we know and need to be a crucial decade for climate action. As we emerge from the first year of the pandemic, global inequalities are more starkly apparent than ever.

February’s interim report of the UNFCCC has made explicit that, as UN Secretary General Antonio Guterres then put it, “We are nowhere close to the level of ambition required to limit global warming to 1.5˚C”. If, and it’s a big if, the current pledges are actually delivered, we are on track for 2.4˚C heating or more.

This threatened breach of 1.5˚C will expose more than two billion of the world’s poorest people to heat stress, crop failures, food scarcity and fresh water scarcity. For the inhabitants of small island states around the world, it threatens survival altogether. We are sleep-walking into an era of climate apartheid that in turn feeds instability into our planetary system and from which no-one is immune.

The past decade has seen extreme weather events – wildfires and hurricanes, cyclones and locust storms – grow increasingly frequent and severe. These events overwhelmingly impact precisely the people – subsistence farmers and fisherfolk, indigenous communities and urban slum dwellers of the global south – who are least responsible for the heating of our planet’s atmosphere.

In response, governments of the world’s wealthiest nations have reneged, year on year, on their 12-year old commitment to deliver $100 billion a year in climate finance, evenly spread between finance for mitigation and for adaptation. During this time, costs related to climate-induced loss and damage have risen to in excess of US$150 billion a year, but no finance has been committed to address it.

This is a deficit that remains unpaid, despite the commitment to loss and damage that was laid out in the Paris Agreement. Meanwhile, wealthy governments continue to call in debts from the world’s poorest people, undermining the resilience of the world’s most vulnerable populations, and to support the ongoing extraction of fossil fuels around the world, undermining the resilience of us all. In just the last four years, for example, the five largest banks in Britain alone have continued to invest £60 billion a year in the global fossil fuel industry.

The global pandemic is dramatically escalating this state of planetary injustice. Globally, 1.81 billion Covid-19 jabs have been administered at a pace of one vaccine per second, but the vaccine has been so unequally distributed that low income countries have, to-date, received only 0.2 percent of the global supply. Across the continent of Africa, less than 2 percent of the population has benefited from this global vaccine roll-out which has created nine pharmaceutical billionaires. Together, those nine individuals enjoy a combined wealth greater than the total cost of vaccinating every single inhabitant of the lowest income countries.

Meanwhile, wealthy nations, including the UK, are still blocking the proposal to lift the patents on Covid-19 vaccines held by transnational pharmaceutical corporations. Yet the UK government states (without any evident irony) that the first priority of its G7 presidency will be to “[lead] the global recovery while strengthening our resilience against future pandemics”. If G7 leaders really are serious about developing our resilience, they will need to focus minds in the coming days and deliver:

The road to our resilience starts here. 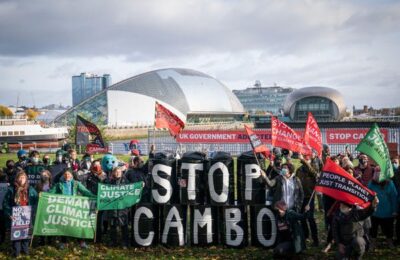